Parkinson’s disease is a progressive, incurable neurological disorder associated with a loss of dopamine-generating cells in the brain. It is primarily associated with progressive loss of motor control, but it results in a complex array of symptoms, including many non-motor symptoms.

Current estimates from the Parkinson's Foundation, an organization based in the United States, puts the number of people with Parkinson's at 10 million worldwide.  They are here https://www.parkinson.org/

Since its discovery in 1817, Parkinson’s disease was believed to only affect posture, mobility, gait, and balance.

While the typical Parkinson's medications address the lack of Dopamine in the brain, they do not tackle these additional non-motor symptoms that occur.

In our case, Ann has issues with almost all the non-motor symptoms necessitating additional medications being consumed on a daily basis.

So, managing the issues associated with Parkinson's is not just as simple as taking the standard Parkinson's medications. You end with veritable pharmacology of medications that have to be managed and dispensed - on time every time.

This leads to one of the most important aspects of Parkinson's Medications - they have to be taken on a strict timetable - or as it often stressed - on time every time.

This assessment will not be concluded until the October 2020 appointment with the Neurologist.

Also, Ann needs to see a podiatrist regularly, something not needed in past years, as the Parkinson's starts to affect her feet.  Ann now wears orthopedic boots, also a new event, but they are helping significantly.

Unfortunately, the Covid-19 pandemic has curtailed her visits to the local Gym, where she is a member and benefits from the close tutelage of the Gym owner and his wife.

The major Parkinson's organizations all stress the need for people with Parkinson's to surround themselves with a Care Team - in addition to their partner.

Ann has a team, her Neurologist, her Physiotherapist, her General Practioner, her Podiatrist, and her Gym Instructor.

The Neurologist, Physiotherapist, and General Practioner all communicate with each other via email to update each other's records of treatment as they progressively manage Ann's Parkinson's.

The Gym owner and his wife keep a close watching brief on Ann, as evidenced below when Ann was back on the bike after Rotator Cuff surgery in 2016.

This teamwork is essential in the effective management of Parkinson's. 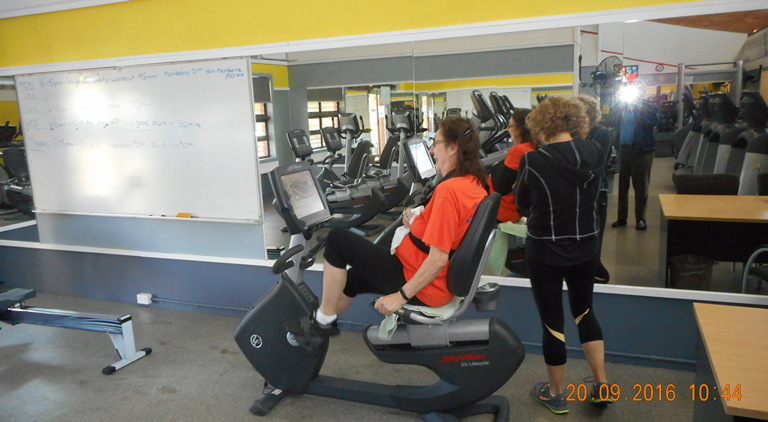 We will be updating our progress from time to time. If you would like to be notified when we add more to our website, then complete the form below. We will then email you when we make changes to our site.